Here is a short prezi with details of the proposed Camino trip for fifth years next Easter.

On 10th April 2014, six brave students from Gormanston College arrived in Spain to undertake the challenge of walking 165km to Santiago de Compostela along the Camino Frances.

The walk began from O’Cebreiro early on Friday 11th in the cool, misty hills of Galicia in Northern Spain. That day the students saw beautiful scenery and well-earned views after a number of steep and arduous up-hill climbs. On arrival into Triacastela, everyone settled into the dormitory, freshened up, did some laundry, checked and managed their blisters, and explored the town. Dinner that evening was the wonderful creation of the boys themselves.

Each day followed a similar pattern. The weather was glorious and the students took every opportunity to get a tan. Some of the highlights of the days included the wide variety of wonderful pilgrims they encountered along the way. The Gormanston boys made a great impression on everyone they met. People of all ages and nationalities complimented the boys on their kindness, friendliness and courage on the Camino. The spirit in which each student undertook the walk was admirable. They were sociable, mature and very considerate of others. They made the trip most enjoyable and worthwhile for the accompanying teachers. The evening meal was also a great opportunity to share stories and have some fun after the hard day’s trekking. Some of the difficulties faced were the physical ones. Blisters, muscle ache and a bit of sunburn made the pilgrimage tough. But the boys never complained or showed any signs of giving up. They remained positive and grateful at all times.

As the students walked the way, they carried an Irish flag. As a wonderful souvenir of the trip, they asked every person they met to sign it and got it stamped in every coffee shop along the way. What a lovely idea. On reaching the Cathedral in Santiago, they stormed into the square full of joy, raising the flag high over their heads. With pride each one received their Certificate or Compostela for their great achievement and then visited the Cathedral to give praise and thanks to God. Each of the boys showed great appreciation for the huge accomplishment they had successfully completed and all are eager to return and travel an extended part of the Camino. Well done to Thomas Keane, Cillian O’Connor Barry, Richard Donnelly Devine, Tristan Parker, Evan Murphy and Luke O’Neill. They are superstars. May they continue to reap the rewards of this journey for many years to come.

Here’s a slideshow of the inspirational students of Franciscan College Gormanston, who walked 165km from O Cebreiro to Santiago de Compostela during the Easter holidays. A full blog report will be posted soon, but here are some photos for now! Well done to those brilliant boys.

(Some photos are a little blurry – sorry and not as many as I hoped – suffered a bit myself, so photos took a back seat!)

What a delight it was to meet Ann Tracey from the Gary Kelly Centre in Drogheda on Wednesday. As Director of Fundraising she came to Gormanston to officially receive the cheque for 1,350Euro gathered by the students who walked the Camino last March. Nine students walked and five of them – Sean Brennan, Kate Brennan, Jake Malone, Robert Tully and Sean Hayes raised money for the centre. What a whopping sum between them. The walk itself was a major challenge, so the additional effort of asking friends, family, neighbours, teachers and more is highly commendable. 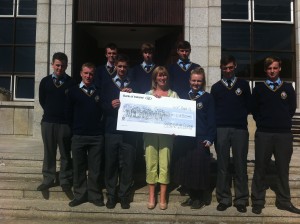 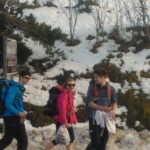 WELL DONE to the Franciscan College Gormanston 5th Years. After 8 days and 160 km + of walking, they reached Santiago Cathedral on March 28th along the Camino de Santiago. Fantastic!! Physically, spiritually, socially it was a very demanding and challenging experience, but at the same time very rewarding and worthwhile. 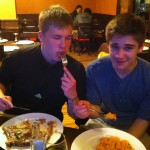 Here is a slideshow of their amazing achievement. The captions on the pictures refer to lyrics from the following songs used in the presentation: “You Get What You Give” (New Radicals), “Feeling Good” (Muse), “Forever Young” (Alphaville), and “In the Sun” (Michael Stipe and Chris Martin). A full write-up will follow shortly but pictures first!!

What a tough but thoroughly rewarding hike on Saturday 9 February. It was the second time for the Camino group to take on Slieve Donard, but this time a more challenging route was taken. The starting point was Bloody Bridge and the hike continued along the course of the river with the same name. Bloody Bridge River is a spate river – meaning in dry weather it is just a trickle and easy to cross, but in rainy conditions it can be a torrent. Crossing over the boulders was a bit tricky indeed as the river flooded around them.

It was onwards and upwards through the mist and muck. As we rose higher, spatterings of snow were all around and it was hard to resist throwing snowballs. The mist lifted briefly for everyone to enjoy crossing through a stone quarry with a gushing (but small) waterfall. The hike up was tough among the stones and heavy muck. Even the most experienced hikers in the group could not avoid a slip or two.

Reaching the Mourne Wall was a relief, but only because no-one had a clue of the mossy, stony, and horrendously steep trek to the summit. There were sandwiches and snowballs before the gruelling ascent began. Despite the exhaustion, a great sense of achievement was felt by all to finally reach the 850m peak of Donard. It was just barely possible to see the sea from the top.

Downhill might be pleasing to the mind, but was in fact quite tricky on the body with a few more slips by some. At the saddle between Donard and its neighbouring peak Commedagh a major snowball attack took place. Liam and Sean H on one side of the wall were a strong match for everyone else! After that the group headed down the valley of the Glen River in more rocky and rather slippy conditions.

Fair play to all the students on the hike and to Adam’s mam for coming along too. Despite the wet, cold and mucky day, everyone was in good spirits and certainly enjoyed the challenge of the hike.

One guarantee – the 155km trek along the Camino will be a walk in the park compared to the preparation hikes undertaken by the best bunch of students ever! Here’s a slideshow of that difficult hike:

What a great achievement by some brave 5th years today. Glorious weather conditions added to a fantastic day hiking along the Wicklow Way.

Sean Hayes, Sean Brennan, Kate, Matthew, Chris, Joe, Robert, Jake and Eoin should all be very proud of conquering the daunting and challenging Djouce. After 5 hours and nearly 18 kms, leg and back muscles were starting to ache. But sunshine, good spirits, breathtaking views of lakes and forests kept everyone going strong. A bowl of soup in Roundwood was greatly appreciated to revive the body and soul. How wonderful that Mr Hayes joined us for the last leg of the hike – thanks! Super day but it’s good to put the feet up now. Watch this space for the next Camino prep hike.

Here’s a slideshow of today’s highlights:

Robert, Kate, Jake, Joe, Adam and Eoin turned up bright and early for the first Camino practice hike today. Meeting in Gormanston at 9am, unsure of the weather conditions that lay ahead, we hopped on the bus and arrived at Donard Park Newcastle Co Down just before 11am. In wet and drizzly conditions we wrapped up and began the steep but varied ascent. The first section of the climb was tricky underfoot as we crossed over the river Glen a couple of times amidst beautiful spruce and pine forest. We then reached an open stretch with the river on our left, the forest on our right, an ocean view behind us and Slieve Donard hidden from sight, but lying in wait ahead of us. We crossed over the river again using delightful stepping stones and the ascent to the saddle between Donard and Commedagh was steep and rocky. Nothing could stop those superhuman fifth years who made it to the saddle as a mere mortal huffed and puffed twenty minutes behind. At the saddle where the Mourne Wall stretches right and left, we met some hikers on their descent who tipped us off to the snow that covered the summit. Mist and fog rolled around us making it difficult to know how far the summit was from us. The intrepid Gormo hikers zoomed up to the top and waited for the last member of the party to arrive. The snow was glistening and the wind was both freezing and forceful so even though it was a fun and exhilarating experience, we did not hang around. The descent was far easier on the lungs and the muscles than the uphill climb had been. Robert and Eoin reached Donard Park first but still came back without any seeming effort to meet the stragglers.

These students are well on their way to being more than mentally and physically prepared for the Camino Pilgrimage next March. To be fair, their physical fitness was never in question (not like that of the organiser of the hike!!)

Here’s a slideshow with some photos from a great day with very cheerful and happy hikers:

Great news for the fifth year adventure-seekers – the Camino trip has got the go-ahead from the Board of Management. Excellent! Ten brave students have signed up for this challenging journey. We’ll be heading off at the end of March so there’s plenty of time to get all the right gear and to do lots of physical training for the 157km that we will walk in 6 days.

There’s one song that seems to sum up some of the values and ideals of the Camino – being pilgrims together on the journey (both of the Camino and of life) and being servants to one another along the way. Have a listen to it:

5th Years – welcome back to school after the summer holidays! I hope you are all well.

After the talk I gave on Tuesday (28th Aug), you are all aware that a pilgrimage along the Camino de Santiago will be taking place at the end of March 2013. This is an exciting and most rewarding opportunity for those who will take on this venture

The preliminary information that you need before you consider whether this trip is for you or not is in the prezi below. This information will also be of interest to your parents and those helping you decide if this is for you.

Please look back at the other blog posts in relation to the Camino – you will find them by selecting the category “Topics of Interest” or by choosing the tag ‘Camino”.