Because of the busy schedule of the TY programme, it is possible that we have had our last religion class of the year. Therefore, I want to leave you with a final message – it has been a pleasure to teach each and every single one of you. Your goodness, openness, sincerity and fantastic participation in class have put a song in my heart.

Remember the sentiments of Morrie: Accept who you are and revel in that; Jack (CS Lewis): Why love if losing hurts so much? (I hope you know the answer!) Stuart: Determination, courage, acceptance, hope for the future.

These inspirational men did not become bitter, they became better; they did not choose the shadows, they chose to live in the sunshine.

I want to leave you, TY’s with a song/reflection that we looked at during the year to remind you that it is a beautiful world we live in and that you have a very special place in the universive. Some words of wisdom from the piece – do not compare yourself to others… be gentle with yourself… strive to be happy… 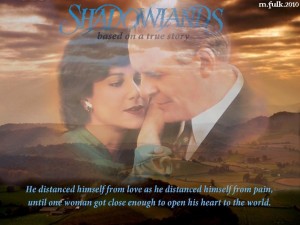 Released in 1993 and directed by Richard Attenborough, Shadowlands features astonishing performances by Anthony
Hopkins and Debra Winger and is the true story of CS Lewis and H. Joy Davidman Gresham. With reasonable (for Hollywood)
accuracy, and unusual (for Hollywood) sensitivity to Christian issues, “Shadowlands” tells of Lewis and Gresham’s love, happiness and suffering. But it majors on Lewis’ lifelong search for the answer to THE QUESTION:

The story is simple enough and one gives nothing away by telling the details. Lewis, the celebrated Oxford don, Christian apologist, children’s author, and emotionally detached bachelor, meets Gresham, American divorcee, poetess, mother, and reader. She comes to England as a fan, seeking out the admired author. He is intrigued by the bright and brash American. They become friends and they have a “technical” marriage before a judge to satisfy some immigration difficulties for her. But she becomes ill with cancer and Lewis, realizing his love for her, marries her again, this time in a religious ceremony. They enjoy a couple of years of happiness and then she dies. Before he has to suffer her loss, Lewis frequently lectures and writes about suffering.

During Joy’s sickness and during the agonizing months after her death, the academic Lewis, who has studied and analyzed suffering, comes to experience it to the hilt. His Christian faith, always the main engine in his life, is sorely tested. He cries out, he rages, he doubts, he prays and at last he returns to where he started — faith — but now chastened his answers no longer self-assured or glib. His theology was always Biblical and confessional but now it is tested and proved in the hot-box of experience. He says to Joy as she writhes in pain on her death bed, “When it gets close, you find out if you really believe it.”

Remarkably, unlike the way religiously motivated people are usually treated in the movies, this film watches his agony with respect. And, in the end, when he walks through a golden valley, (the main image in the movie for elusive joy), the movie lets us share his peace. Lewis had been right all along. It took the major tragedy of his life for the truth to become more than an academic exercise for him.

“Shadowlands” is a rare and precious thing: a well- made major motion picture that deals honestly with people whose driving force in life is faith.

Here’s a prezi – as always a work in progress – that looks at some of the issues raised by the film:

professor, Morrie Schwartz. Mitch had not been in touch with Morrie for 16 years. One night while watching TV Mitch was surprised to see his old college professor being interviewed byTed Koppel on the “Nightline” programme about what it was like to die from Lou Gehrig’s Disease. Mitch felt both horrified and ashamed. He had shared a wonderful relationship with Morrie as his professor but had made no effort to see him since he had graduated. Immediately he made contact with his old professor and friend, flew to Boston for a reunion, and began to visit Morrie on a weekly basis. During their weekly visits Mitch quickly became aware that not only was he rekindling his relationship with Morrie but that he was also tackling a larger subject, the meaning of life.