The national Holocaust Memorial Day commemoration takes place on the Sunday nearest to 27 January every year.

The event honours the memory of all of the victims of the Holocaust: six million Jews as well as over five million other victims, persecuted because of their nationality, ethnicity, sexual orientation, disability, religious beliefs or political affiliations. The inclusion of all of the victim groups is essential to the commemoration, highlighting the importance of education about anti-Semitism and all forms of intolerance.

On Sunday 26th January three students from Franciscan College Gormanston took part in the commemoration in the Mansion House, Dublin. 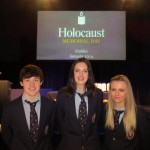 Head Girl – Niamh Kelly-Whyte, and College Prefects – Kate Brennan and Darragh Clarke read out names of Holocaust victims who had any Irish connections. They did the college proud! It was a solemn and dignified occasion leaving the 700 attendees with the message that we should never forget and that we should teach our children so that nothing like this ever happens again.