How long has the tradition of Hallowe’en been around and why did it begin? Perhaps it started with the pagan festival of Samhain (one of the four major festivals in the Celtic Calendar – 1st February: Imbolc; 1st May: Bealtaine; 1st August: Lughnasa; 1st November: Samhain). 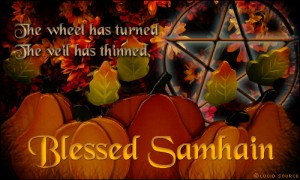 The festival of Samhain is a celebration of the end of the harvest season. The Celts were avid followers of nature and the cycle of life. They observed that in October plants died animals disappeared, days grew shorter and nights grew longer. Samhain was a time used by ancient pagans to take stock of supplies and prepare for winter. The ancient Gaels believed that on October 31, the boundaries between the worlds of the living and the dead overlapped and the deceased would come back to life and cause havoc such as sickness or damaged crops.

On October 31 and November 1st every year they would try to pacify Samhain (the god of death) with food and also scare him off with bonfires (bone-fires: kindled from skeletons of sacrificed animals). They carved lanterns out of turnips. Masks and costumes were worn in an attempt to mimic the evil spirits or appease them.

How is this connected with Christianity? When Christianity became the official religion of the Roman Empire, deliberate efforts were made to announce its victory over paganism. This was done by replacing pagan symbols, places and feasts with Christian ones. In the ninth century, the Church officially designated November 1st as All Saints’ Day, a celebration commemorating all the saints (people who we are sure are in heaven). The night before became known as All Hallows’ Evening (Hallowe’en for short), a holy vigil to draw attention to the following day.

Over time, different cultures have added to the evolution of Hallowe’en. Medieval beggars knocked on doors for ‘soul cakes’ in exchange for prayers for the household’s deceased members. Costumes became a way for people to participate in pageant form in the story of life, death and what happens hereafter. Brought across the world by Irish emigrants, the feast eventually lost any religious significance and became a purely secular event. 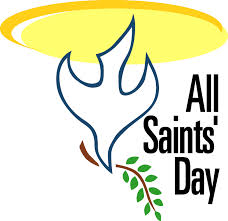 What about November 1st? This is All Saint’s Day and is a holy day of obligation – Catholics should attend Mass on this day. It celebrates the lives of all Christians who have died in a state of grace.

But what is a saint? Saints, broadly speaking, are those who follow Jesus and live their lives according to his teaching. Catholics, however, also use the term narrowly to refer to holy men and women who, through extraordinary lives of virtue, have already entered Heaven. St. Paul often addressed his letters to ‘the saints’ of a particular place. The assumption was that those who followed Christ had been so transformed, that they were now different from other men and women and should be considered holy. Soon, however, the meaning began to change. As Christianity began to spread, it became clear that some people lived lives of heroic virtue while others struggled to live out the Gospel of Christ. The word ‘saint’ took on the narrower meaning of those who easily practised the theological virtues of faith, hope and charity.

Why is November 2nd significant in the Catholic Church? This day is called All Souls’ Day and it commemorates all those who have died and are now in Purgatory being cleansed of their venial sin and atoning before fully entering Heaven. Praying for the dead is a Christian obligation. The Church devotes the month of November to prayer for the Holy Souls in Purgatory.

The triduum of Hallowe’en, All Saints’ Day and All Souls’ Day may have its roots in a Celtic pagan festival, but today the last two have a richly Catholic significance with the first being a reminder of the holy days that follow.