Third year students went on a visit to the Islamic Cultural Centre and Mosque in Clonskeagh.
Mr Ali Selim showed them photographs of three holy Muslim shrines – the Ka’aba, the Mosque of the Prophet in Medina and Al Aqsa Mosque in Jerusalem.
He then took our students into the Mosque itself where he explained about the religious beliefs and practices of Islam. His talk included an explanation of the Five Pillars of Islam, a history of the prophets and an explanation of the importance of prayer and pilgrimage in the lives of Muslim people. Mr Selim explained the significance of various items in the mosque, such as the set of clocks and the mihrab in the kiblah wall.
He took our students to watch a short video about the contribution of arabic culture to society in the dark ages which still impacts society today.
Mr Selim was very generous with his time and answered any questions that the students had.
This visit will be of great benefit to the students in the writing up of their journal and in their revision for the Junior Certificate examinations. 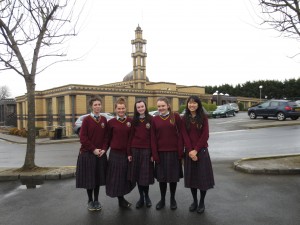 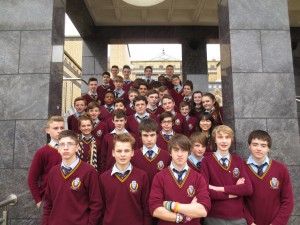 The whole group outside the mosque 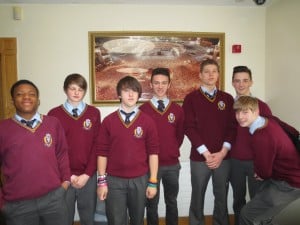 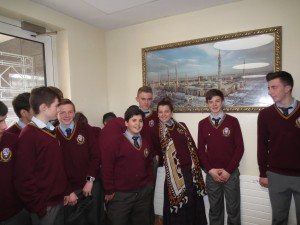